The extreme ongoing devastation caused by climate change is now part of our daily lives. These events are impacting our environment in unimaginable ways. The search for sustainability in each of our lives depends on the actions of each individual, which must be directed towards a healthier future for our planet and descendants.

Be it a simple citizen or a large corporation, there is a need for integrated change toward an ecological and economic balance. IDYLL brings together the science and knowledge of the economic and social dynamics of our planet. We design solutions based on awareness, sustainability, and resilience. IDYLL refers to simple and sustainable values, which are ideal, but not utopic, goals. There is no Plan B or Planet B. Our planet is our only home and it is our duty to act, right now!

In 1988, the year I graduated in Geology, I entered Toca da Boa Vista, a cave in the semi-arid northeastern Brazilian state of Bahia, for the first time. My companions and I had just started to explore this new cave. Although the area is extremely dry (it receives an average rainfall of 470 mm per year), the cave displays abundant crystalline formations, such as stalactites and stalagmites. These deposits are formed by water dripping from the cave ceiling. However, the deposits were completely dry.

It became evident that the area had undergone past periods of more abundant rainfall. In the following years, as we continued exploring the cave, we started discovering several complete skeletons of large extinct mammals. For instance, we discovered new species of giant monkeys, which would have lived in a forested environment, unlike the present-day monkeys that survive among shrub vegetation. We also found an extinct species of bear, which would have lived in a much cooler climate. We dated some of the massive deposits of guano (bat feces), which yielded a range of old ages, starting 12,000 years ago. However, the cave is home to very few bats today. We recognized that northeastern Brazil in the distant past was subject to a very different climate, much wetter than that of the present. These remarkable findings aroused my interest in Earth’s past climate and how it has changed over time.

Following a few years in Europe and the US studying Earth’s water cycle, in 1995, I wrote a research project aiming to decipher the past climate changes in northeastern Brazil using cave deposits. I spent 4 years in Bristol (UK) during my PhD, applying techniques that had never been used before in Brazil. Later, this work, which described the more humid phases that prevailed in the last 210,000 years in the-now semi-arid Brazil, was published in the world’s most prestigious scientific journal, Nature. Back in Brazil, my focus moved toward understanding the past climate changes that had occurred in Amazonia. With Brazilian and international funding, my colleagues and I were able to show how the Amazonian climate (and the forest) changed over the past 45,000 years. This research also resulted in a publication in Nature. In 2006, I left academia, but remained involved in several scientific projects through collaborative arrangements with colleagues and friends from many parts of the world.

Many years have gone by since that day I entered Toca da Boa Vista. Today, this cave is 114 km long, the longest cave in South America, and among the most important in the world. Over more than 30 years, the need to understand the changes in the climate that are taking place now—or will happen in the future—is more urgent than ever. IDYLL represents the realization of an old dream. At IDYLL, we apply science and research to understand the causes and future consequences of these environmental changes. 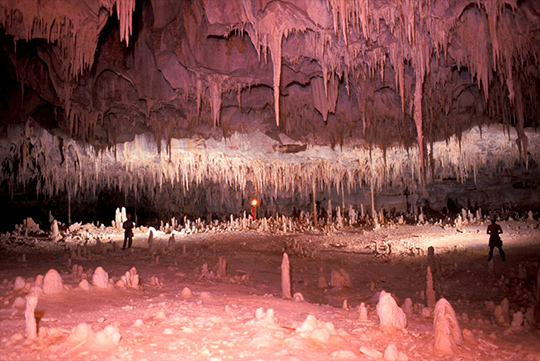 Augusto Auler is from Belo Horizonte, businessman and researcher. He holds a degree in geology from the Federal University of Minas Gerais (1988), a master’s degree in hydrology from Western Kentucky University, United States (1994), a doctor in physical geography and geochronology from the University of Bristol, England (1999), with a postdoctoral degree in paleoclimatology by UFMG (2006).

He was the founder of active environmental NGOs linked to karst, such as the Bambuí Group for Speleological Research and the Carst Institute. He works as an entrepreneur managing environmental consulting companies (specialized in karst – www.carste.com.br) and services.

As a researcher he is a member of the editorial board of 28 scientific journals, including International Journal of Environmental Research and Public Health, Palaeogeography Palaeoclimatology Palaeoecology, Sanitary and Environmental Engineering and Journal of South American Earth Sciences. Author of 58 complete articles published in journals and 9 books.