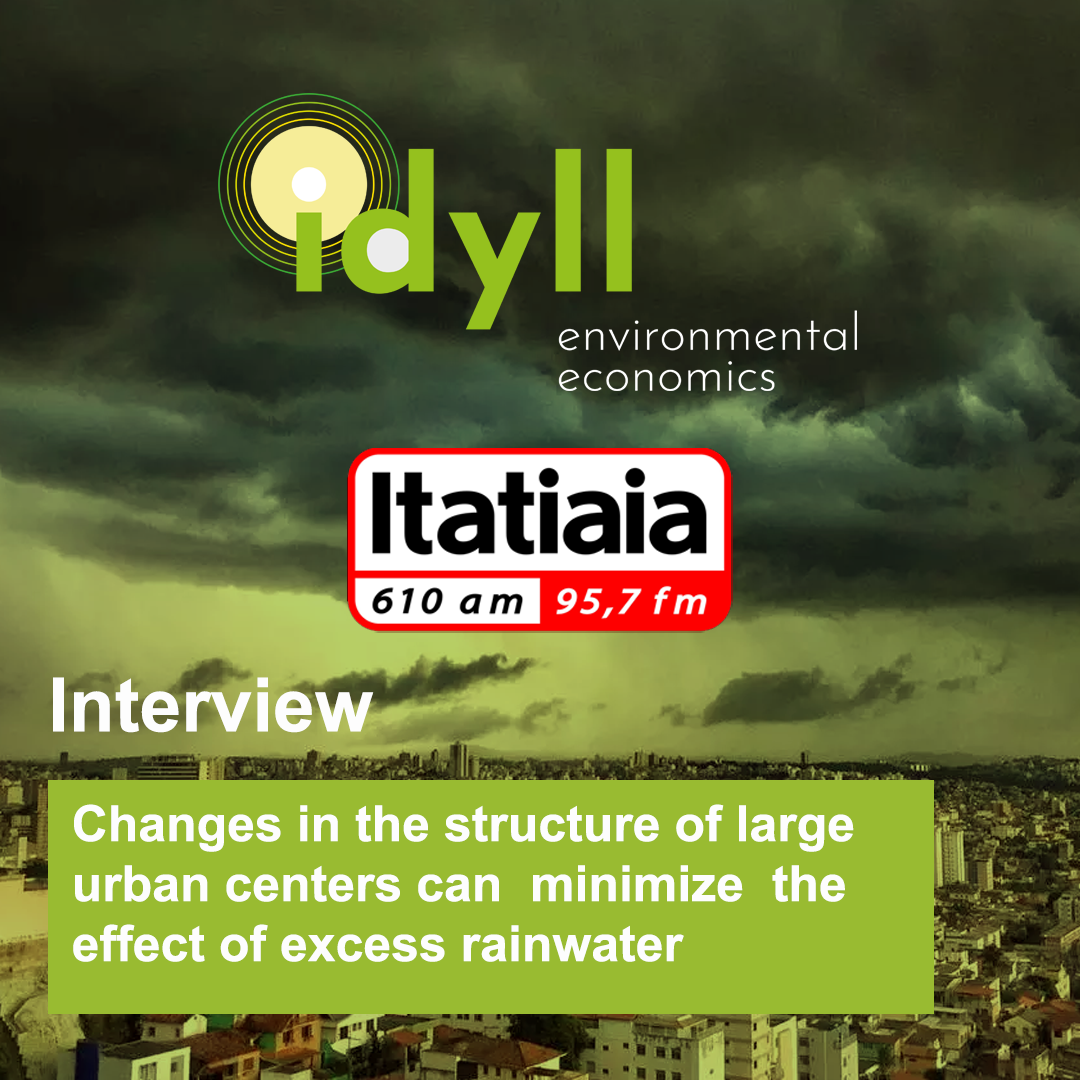 Posted at 12:28h in Rainfalll and drainage by Idyll 0 Comments

This last Friday morning (November 20) our founder and diretor Augusto Auler, geologist, consultant and doctor in the field of climate change spoke to journalist Camila Campos of Rádio Itatiaia to explain the term “Rain bomb” and also the association between the intense rainfall regime in Belo Horizonte and Climate Change. See below some excerpts from the interview.

It is practically impossible to be able to stop in the short term the impacts of rain as it has descended from the sky in large capitals such as Belo Horizonte, marked by a gray scene in the face of so much cement that has on these big cities, a global problem. The evaluation is by geologist Augusto Auler who draws attention to the peaks of intensity in this rainy period.  Also called by scpecialists “Rain Bomb”, is the rain that usually comes fast but strong enough to overcome the infrastructure that was planned when most of the cities arose.

The “Rain Bomb” is a term that I heard in the United States, and it denotes these very intense and generally short-lived heavy precipitation events.  […] Cities represent large areas that are waterproofed by the construction of highways, streets, garages, buildings, houses, sidewalks, etc. That is, there is a very large concentration of drainage, so when the water falls into this huge cemented area it can not infiltrate vertically. It (the water) runs and acumulates, resulting in true rivers, floods that have no way to flow. So that’s the big problem with big cities.

This problem occurs in several cities around the world, in Belo Horizonte, particularly, due to a series of channelized streams and rivers this problem is more exacerbated.

According to the expert with extensive international experience in the area of climate change, in England, Spain and the United States, it would only be possible to think about long-term solutions.

In fact, climate change has caused problems in several cities around the world, it is not only Belo Horizonte. Our cities were designed for a kind of climate that is basically being changed very quickly. More humidity in the air means more intense rainfall and causes the volume of water that falls in short time exceeds the runoff capacity for which the city was planned. This means that our storm draines do not have the capacity to drain more intense rainfall.

The streams that were channeled a few decades ago, most of them, were channeled in a scenario where there were no such heavy rains, which now causes them to overflow. For instance, we are still in November, which is not the wettest month, which is usually December and January and we are already having problems with flooding and overflowing.

In the long run the solution would really involve increasing the flow capacity of the various rivers and streams that are currently channeled. This is a very large work. A project that requires time and financial costs that are not within reach of a mandate, this would involve a long-term solution, in this case years or even decades.

You Augusto, who has extensive experience in the area of climate change, in Spain, the United States and England, what is the doctor’s assessment of this scenario of so many Brazilian cities and even around the world marked by so much gray, so much cement? If we have already reached a point where it is no longer possible to think of short-term solutions, what each of us could do to alleviate the effects of this rain?

There is really no way you can stop the rain. Global warming leads to higher levels of evaporation and makes you have, in a very simple way, more intense rainfall. Therefore, instead of avoiding the rain, you must prepare for the rain. This is called adaptation, resilience. However this takes time. We should increase the flow capacity in Brazilian cities, something that is possible in terms of engineering, althought it takes time and there is a high cost linked. Increase the flow capacity of these various rivers and streams that are channeled under Belo Horizonte. It is also possible, nothing that is not practical in terms of engineering but takes time and there is also a very high cost.

The citizen has to be prepared. Today our weather systems are much more accurate, it is possible to predict the weather with a certain advance of a few hours or days. It is possible to have an alert, for instance the civil [of Belo Horizonte] defense has done it very successfully.

Alert the population that this type of event may occur, the so-called “Rain Bombs”, for the population to protect themselves. And it is clear in terms of urban planning to avoid the occupation of areas close to rivers (floodplains), close to channeled streams, to avoid circulation in these areas during heavy rain events and in the medium to long term I am talking of years and decades, urban planning that maps these most vulnerable areas.

And in the future you may be able to even remove the people who live in those areas and move them to safer places.  Of course, those solutions involve very high costs, they are solutions that transcend simple mandates of 4 years of mayors, something that must really be done in the long run. We can not contain climate change in the short term, but we can at least avoid the risks associated with it.